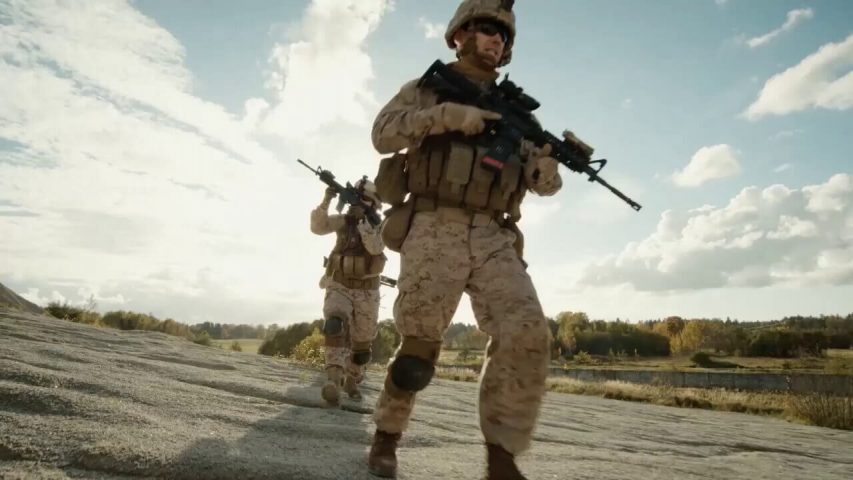 How Heavy Is Military Body Armor?

If you want to know exactly how heavy military body armor is, imagine gaining 30lbs and needing to run, jump, and climb. Then there is the backpack and everything you need to carry in it. While not as hard at first, after a while the weight gets to you, ankles start aching, feet start swelling, and you just stop having such a swell good time.

There are three sets of armor that a soldier might wear when deployed:

Additionally, there are your gloves and your eyewear that will also be resistant to impact and debris to a point. Technically, military goggles will stop a .22cal bullet, but no army will be shooting at you with that. That rating is to protect you from shrapnel and all kinds of flying particles.

What Is Military Body Armor Exactly?

While it may seem from the outside that each soldier always wears the same armor, that is mostly for promotional and cinematographic purposes. Any gear will always adapt to the needs of the mission and the demands of the terrain.

Every setup will include a plate carrier and a helmet. And, when using NIJ Level III armor this combination will already get you to about 15 pounds.

But, if you plan on engaging any type of urban warfare where an enemy might jump from the unknown at any second and spray you with IEDs and bullets, you will need more.  With your plate upgraded to Level IV with a ballistic IIIb cummerbund and your neck, shoulders, groin, stomach, and thighs protected, you can be looking at 40lbs of weight on your feet easy.

More than Just Us Jarheads

For some lucky divisions, like recon, where mobility and agility are crucial, less armor and baggage will be carried. As they generally don’t come into danger from explosives as much, they won’t be carrying auxiliary armor.

Also, most units that plan to do all of their work from a chopper or Humvee don’t cover everything. They would still wear their plate carrier and a helmet, but won’t bother with much more.

Finally, there are those who protect our liberty and way of life back home. The US Army Reserve and the Army and Air National Guard form a vital part of the mechanism that enables everyone to do their job properly. They will usually be wearing soft armor when operating domestically and only carry plates if duty takes them abroad.

Also, troops usually don’t use ballistic helmets when training, but rather bump helmets. All of these reductions lower the soldier’s armor to about 5-6lbs, which is negligible.

In more ways than one, explosives are much more dangerous than bullets. Aside from artillery fire and aerial assaults, someone throwing an IED as much as they can create a lot of problems. This is especially true in enclosed environments and urban settings.

Helmets, eyewear, and neck protection are often the piece of armor that will save your life from those attacks.  Lobbed shrapnel and plunged debris can travel very far and injure even those who were well beyond the blast radius.

Here, even a small injury to your head, eyes, or neck can mean that you will be incapacitated and in need of a medic.

The weight of a soldier’s armor will vary depending on his or her job. When training or supporting domestic efforts it can be very low. But, when deployed into dangerous regions where they will be under fire from rifles and explosives, they will layer ballistic plates and fabric wherever possible.

The plate carrier alone will weigh 7lbs at least and can go up to 30. When you include the helmet, arms, mags, and all the additional gear, these can add up really quickly.

That is why every commander takes extreme caution about what their soldiers will carry and where trying to find the optimal balance between protection and combat ability.

Previous post
Next post
Related articles
Blog
What is a Bump Helmet?
A bump helmet is used to prevent bumps on the head. But, selecting a good bump helmet is not as easy as knowing the general purpose of the gear. The best models around are those that will not only serve as a hardhat but will also stop piercing and be able to attach gear on. There are three main aspects when selecting a bump helmet: Protective capabilities Tactical capabilities Comfort And while most operators will focus on what the helmet...

Blog
What Kind of Pants to Wear with Combat Boots?
Since the time when the first military parade passed through an ancient city somewhere in the Middle East, military apparel has become popular in fashion. While this is completely acceptable for civilians, those who wish to find tactical pants to wear with their combat boots will need to look deeper. It may be undeniable that combat boots and pants look cool, but for a wide variety of security-focused and intensive jobs, you will need real tactical boots and pants that...

Blog
What Glasses does the Military Use?
Especially when it comes to men’s fashion, some of the most popular glasses to wear are those used by the military. For instance, the ‘’Aviator’’ sunglasses were popularized all the way back in the 1940s and are still one of the most recognizable designs. But, sunglasses are nowhere near the only type of glasses used by the military, especially if we include the Army, Navy, and the Air Force. Depending on the mission, requirements, as well as the operator,...

Blog
What‌ ‌are‌ ‌Modern‌ ‌Military‌ ‌Helmets‌ ‌Made‌ ‌Of‌
The need to protect your head, especially in combat, is by no means a novel one. The moment some ancient cavemen picked up a club the other cavemen realized the need to cover their head with something that will stop that club. Modern military helmets are just an extension of that tradition. Regretfully, it is much harder stopping a bullet than it is to stop a wooden club, meaning that we need to use new technology and materials to stop...

Blog
How Bulletproof Armored Clothing Works?
Bulletproof armored clothing is one of the best things to happen to civilian protection in ages. Obviously, it is still only bullet-resistant, and only against handgun rounds unless fitted with a plate, but excels in civilian protection and plausible domestic situations. Unlike covert armor that requires some expertise in handling and is not always perfectly comfortable, armored clothing is as close to regular apparel you can get while being able to stop a bullet. Currently, there are three types of...

Blog
Concealable Armor: What Is It?
It might sound self-explanatory that concealable armor is the armor that you can conceal, but the name alone doesn’t explain the options available for different situations. Also, it is not enough for the armor to be covered with plain clothes, as it also needs to move like plain clothes. Additionally, while the vast majority of concealable armor is soft armor, there are concealable plate carriers. It is possible to carry a plate that will be virtually invisible to anyone but...